In Haiti: Israeli Doctor Saves Lives Among the Ruins 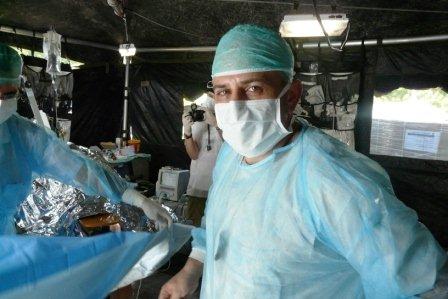 Dr. Pirotzky at the Israeli Field Hospital in Haiti

It was a day like any other and I, Dr. Anatoly Pirotzky, was in the middle of a routine orthopedic surgery at Israel's Rabin Medical Center when the phone rang. I was asked whether my passport was valid and if I was willing to join the Israeli delegation flying to Haiti after that country's horrible earthquake. Twenty-four hours later I was on a plane as part of an effort to bring hope and life saving medical services to a country in devastation and ruin.

We safely landed in the Haitian capital, Port au Prince, and spent the first night in sleeping bags on the grass of the soccer field that would soon be an Israeli Hospital. At 4 o'clock in the morning, another Israeli plane arrived in Haiti with the supplies and we opened up what was to be known as the "Rolls Royce" of field hospitals, attracting reporters from around the world who would speak of the miraculous work of the Israeli doctors who were providing unbelievable medical care, saving lives among the ruins.

Our Israeli field hospital offered a full range of services and could deal with all types of injuries, even including imaging equipment to help us diagnose and treat the hundreds of wounded Haitians arriving every day, a heart-breaking sight. We had no time to think, only to help. Coming from Israel, we were sadly experienced in dealing with tragedies and knew only too well how to deal with such trauma and injuries. We were ready for this difficult task and we began to work around the clock as children, men and women of all ages began to arrive for medical help. We needed to perform one operation after another in an operating room without air conditioning in 112 degree heat.

Some of those moments will be with me forever, like when a young man refused to have an amputation because he thought he had to pay for the surgery and had absolutely no money. When we explained that the operation was free, he agreed and we successfully but sadly amputated his leg. In another case, a man who had to have his legs amputated thought it was better to die than have his wife take care of him, a cripple, along with their three children. Of course we convinced him otherwise. And then, there were the children, so many of them in need of orthopedic surgery. I had some experience operating on children in Israel, which proved a godsend in Haiti, a lifeline to these children whose pain and suffering was the most difficult burden to bear. For me as a father of three, visiting the children's tent was the hardest part of my job. I knew that many of them were now alone in this world and their lives, even though we were able to save them, would be never be the same again.

During our stay in Haiti, the Israeli delegation treated more than 1,100 patients, conducted 319 successful surgeries, and delivered 16 babies, including three Caesarean sections. In a land devastated by disaster, we brought hope, often making the difference between life and death. I will forever remember the faces of all those people lying on my operating table and feel privileged to have been part of this incredible team that was able, even in the worst situation, to make a crucial difference in the lives of the people of Haiti, who I have no doubt will be our friends forever.

The Israeli delegation of doctors were a symbol of humanity, upholding the Jewish tradition and belief that saving lives is the greatest gift of all. I am proud to be one of the lifesavers and hope the world will remember us as such.

DONATE NOW to support our efforts to offer EMERGENCY CARE

The NYC 5K Schlep of 2015: Raising awareness and funds for Breast and Ovarian Cancer

Successful Tenth Annual Gala Dinner: Broadway On the Hudson Comes to the Intrepid

Judy Siegel-Itzkovich, THE JERUSALEM POST
It isn't an "old wives' tale" that carrying a male fetus is more "troublesome" than carrying a female fetus, according to research encompassing over 66,000 women who gave birth at the Rabin Medical Center (RMC) in Petah Tikva between 1995 and 2006.