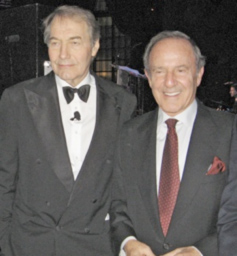 by Masha Leon, as appeared in the Jewish Forward

For the first time in Israel, a new mitral valve in the heart was implanted into a leaky one using a catheter rather than opening up the chest, by cardiologists at Petah Tikva's Rabin Medical Center-Beilinson Campus.

"When a patient checks in, no one asks their religion [or] affiliation," said Abraham "Barry" Cohen, chairman of the American Friends of Rabin Medical Center, in an address at the organization's November 13 "The Best of New York Meets the Best of Israel" gala, held at Cipriani 42nd Street. "If others acted this way, we'd have peace."

Board member and past AFRMC board president Stephen Siegel received AFMRC's Yitzhak Rabin Excellence in Leadership Award. Jerusalem-born Eli Hurwitz, chairman of the Board of Teva Pharmaceuticals, was honored with the Yitzhak Rabin Visionary Leader Award; his son Haim Hurwitz accepted on his behalf. The elder Hurwitz died in Tel Aviv on November 21. In presenting the award, Cohen said that Teva Pharmaceuticals "is known as Israel's 'national company' and has become one of the world's most respected pharmaceutical manufacturers."

Television personality Charlie Rose was the evening's host, and his question-and-answer session with media mogul Mortimer Zuckerman was unique for its candor. "It's the first time an American president has not visited Israel," Zuckerman said. "Would you support the president?" Rose asked. "Depends on who's running," Zuckerman replied. "[At this moment] I'd support Mitt Romney over Obama."

Responding to a question from Rose about the weak economy, Zuckerman cited a roster of governmental agencies that are in the business of tallying the "unemployed, underemployed and part-timers" before arriving at a bottom-line assessment: "Forty-eight million are now living below the poverty line." When Rose - who joshed: "I call [Zuckerman] my rabbi. He teaches me things" - suggested he run for president, Zuckerman laughed. "When this administration is ready for this Canadian-Jewish candidate for president, call me," he said.

AFRMC President Nava Barak touted the Rabin Medical Center as "crucial... to all casualties - including victims of rockets aimed at Ashkelon." Dr. Eyran Halpern, Rabin Medical Center's CEO, said, "Rabin practices medicine without borders," and announced a $100 million five-year expansion plan. Affiliated with the Tel Aviv University Sackler School of Medicine, the Rabin Medical Center is Israel's largest medical institution, serving as a referral center for patients throughout the country and the Middle East. With close to 1 million patient visits a year, it boasts a staff of 4,500.

The gala was orchestrated by AFRMC Executive Director Joshua Plaut. That evening, auctioneer Jennifer Roth, senior vice president of the Fine Arts Department at Sotheby's, helped raise funds with an auction at the gala for equipment, from oxygen masks to EKG machines, for the new Emergency and Trauma Center at the Rabin Medical Center.

For the first time ever in Israel, the dedicated staff at the Rabin Medical Center performed a small intestine transplant in an adult.