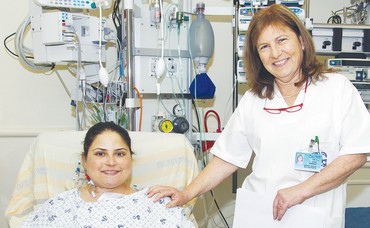 Two families donated the organs of their brain-dead loved ones over the weekend, resulting in eight organ transplants in hospitals around the country. All are doing well.

The two donors were a 19- year-old man killed in a road accident, and a 48-year-old woman who died from a brain aneurysm a few hours before her daughter was supposed to have a bat mitzva party.

A heart from the Hadassah donor was transplanted into 27 year old Dikla Cohen at Sheba Medical Center at Tel Hashomer. Fifteen years ago, her father had undergone a heart transplant to replace his own heart, which was defective due to a genetic mutation that his daughter also inherited. He died a year after his surgery because he stopped taking anti-rejection drugs.

Cohen had been hospitalized at Sheba for several months and been unable to take care of her young son all that time.

Aharon Karov, the newly-married 22-year-old IDF officer in the paratroopers who went to war in Gaza a day after his wedding and was critically wounded, has been discharged from the hospital today and is recuperating nicely.

Eight Israelis were given a second chance at life this week as doctors at Rabin Medical Center's Beilinson Hospital performed several complex transplant operations over just a few days.

On the evening of May 7th, 2006, David Baruch from Fort Lee, New Jersey, accompanied by his three children Assaf, Sharon and Karen, officially inaugurated the David Baruch Day Care Floor at the Davidoff Cancer Center.