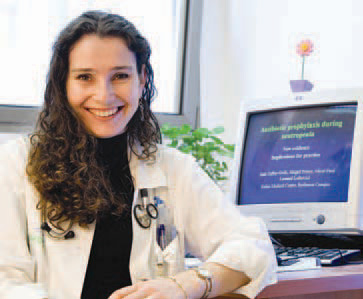 As if being stricken with cancer isn't enough, there are many cancer patients whose immune systems become so weakened by chemotherapy treatments that they become prone to life threatening infections.

Research trials at Rabin Medical Center led by Dr. Anat Gafter-Gvili, a senior physician in the Department of Medicine E together with Abagail Fraiser, Dr. Mical Paul and Prof. Leonard Leibovici, head of the department, have discovered a base for prevention, specifically in hemato-oncology patients. Their studies have shown that using common antibiotics during the period in which patients undergo chemotherapy, can reduce considerably the rate of mortality and the incidence of infection. These trials were done on test groups consisting mainly of patients with hematologic cancer who were undergoing chemotherapy. Ninety-five trials were performed between 1973 and 2004. The findings were recently published in the June 2005 issue of the prestigious American Journal of Medicine "Annals of Internal Medicine" and have generated considerable interest among professionals in this field.

Following this study, new treatments are now being considered for Rabin Medical Centers hematologic cancer patients, specifically those suffering from leukemia who are also undergoing chemotherapy. There is real hope that the use of antibiotics in these patients will prevent other bacterial infections and complications that have been seen in the past. Staying strong during cancer now has an important ally.

For Mira Tako, the Davidoff Center was truly a lifesaver.

Rabin Medical Center takes the onset of swine flu seriously. When a 38-year-old man, whose lungs had been severely damaged by the swine flu, needed intervention, Rabin Medical doctors went the extra mile to save his life.