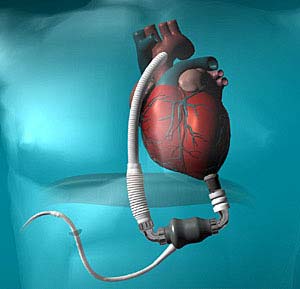 Seventy year-old Gershon Gefen was not thinking about a trans-Atlantic flight to the United States when in mid-2008, doctors in the Cardiothoracic Surgery Department of Rabin Medical Center, transplanted Heart Mate II, a permanent left ventricle assist device. Heart Mate II is the newest generation of left ventricular assist devices produced by the American firm Thermo Cardio Systems Inc., which later merged with the Thoratec Corporation, also in the US.

Gefen, who suffered for years from a critical cardiac disease that severely affected his heart function, was hospitalized at the RMC Intensive Care Cardiac Unit because his condition had deterioration. Due to his age and the gravity of his situation, the only option for survival was to transplant a permanent artificial heart assist device.

Chairman of the Cardiothoracic Surgery Department, Dr. Eyal Porat, and Dr. Benjamin Medalion, who heads the Department's Heart and Lung Transplant Unit, conducted the procedure. They were assisted by Dr. Ortwin Friesewinkel from the Herz and Gefass Clinic GmbH in Bad Neustadt, Germany, a surgeon specializing in such transplants. Only several such transplants have ever been performed in Israel.

Following the procedure, Dr. Medalion noted: "In contrast to artificial heart assist devices that are used as a bridge to transplantation while a patient waits for a human heart, this device provides a permanent alternative, and the patient can soon return to an active lifestyle." This was indeed correct, since just a year later in June 2009, Gefen became the first person in the world with a permanent heart assist device transplant to take a trans-Atlantic flight to visit his daughter who lives in the United States.

Arranging such a flight from Israel to America was no easy feat. Gefen negotiated with several insurance companies until he finally found one that would insure him. He then had to find an airline that would agree to his flight. The concerns were that the heart assist device came with electronic equipment that might upset the plane's communication system and also that there was no suitable infrastructure for powering the device on the plane.

In desperation, Gefen turned to his doctors at RMC, including his attending cardiologist, Dr. Tuvia Ben-Gal, head of the RMC Cardiac Failure & Cardiomyopathies Clinic, who assured the airline that as long as the equipment supporting the heart assist device was connected to a power line throughout the flight, everything would be alright. El Al finally agreed following a successful trial run in which flight operations remained intact while Gefen and his heart assist device were connected to the aircraft's power line.

While in the United States, Gefen had another challenge: finding a way to recharge his heart assist device using 110 volts of electricity rather than Israel's 220 volts. Fortunately, Beth Israel Hospital in New York came to the rescue.

After a wonderful three-week visit with his daughter, Gefen says he would have never gotten off the ground if not for the unbelievable help from his physicians at RMC and the electronics officer at EL AL.

This was a flight he will never forget.

DONATE NOW to support our efforts to offer HEART CARE

The annual American Friends of Rabin Medical Center Women's Luncheon was hosted by the Israeli ambassador to the United Nations and his wife, Ambassador Dan and Janice Gillerman, in their Manhattan home.

Over the weekend of December 2, 2005, more than 500 people had an opportunity to learn of revolutionary practices at Rabin Medical Center.

Thanks to your support, this year’s annual Cheryl Diamond NYC 5K Schlep proved to be a major success as over 300 participants and supporters came to fight against Breast and Ovarian Cancer and raise money for the BRCA Gene Multidisciplinary Clinic.