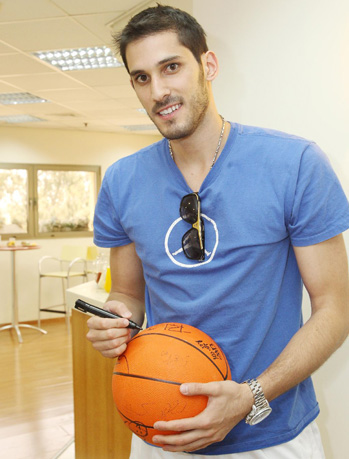 The Israeli National Basketball team recently visited Rabin Medical Center where they underwent their annual medical checkup at the hospitals First Class Institute. Among the team members was Omri Caspi, who in 2009 was the first Israeli to be selected in the first round of the NBA draft and the first to play in an NBA game. Today he is a successful NBA player for the Cleveland Cavaliers.

Other players came from Europe as well and between their medical tests the team members had a chance to talk basketball and exchange ideas for their upcoming games.

Dr. Eyran Halpern, CEO of Rabin Medical Center welcomed the team, where he received an autographed basketball signed by players and said that he takes great pride in the countries wonderful basketball team.

Davidoff Cancer Center is an international leader in cancer care and has set the standard as Israel’s first and preeminent comprehensive cancer center.

Keeping the Past Alive With Joy

Although Rabin Medical Center has become a unique and modern facility, it has never been far from its Zionist roots.

A special interfaith mission to Israel, of Jews and Christians from New Jersey and across the USA, was launched in November 2006 under the leadership of Mr. William Sutter, head of Friends of Israel and Alan Respler, head of the Jewish Community Relations Council of Southern New Jersey.