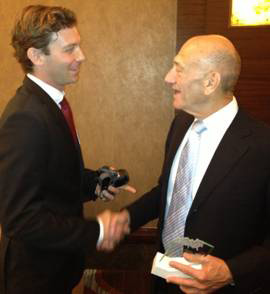 American Friends of Rabin Medical Center in partnership with the Jewish Federation of Las Vegas is proud to present our most recent Rabin Medical Exchange Fellow, Dr. Lee Yaari.

Dr. Yaari's Fellowship, named after AFRMC Board member Ofer Yardeni and his wife Shari, was under the auspices of Dr. Hugh Bassewitz of Desert Orthopedics Center of Las Vegas and coordinated with the assistance of Elliot B. Karp, President & CEO of the Jewish Federation of Las Vegas. Dr. Bassewitz is the Chairman of the Board of the Jewish Federation. Dr. Yaari studied in the United States for four weeks, concluding with a two week tenure at the Hospital for Joint Diseases in New York City. Dr. Lee Yaari is a chief resident in the Department of Orthopedic Surgery and Traumatology at Rabin Medical Center and is in his fifth year of a six year residency in Orthopedics. He is a talented surgeon and highly respected by the staff and his patients. He was a naval medical doctor in the Navy Seals of the Israel Navy.

We were honored to welcome Dr. Yaari to the United States as the Ofer and Shari Yardeni Rabin Medical Exchange Fellow (for the fourth year in a row), under the auspices of the Las Vegas Jewish federation and community.

The Fourth Annual Meeting of the International Board of the Davidoff Cancer Center, held May 23rd-25th, 2010 was the first board meeting held since the death in 2009 of Ruth and Leon Davidoff.