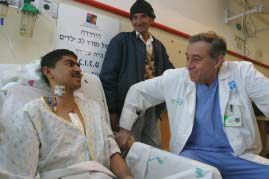 Professor Bernardo Vidne, Chairman and Director of the Department of Cardiothoracic Surgery at Rabin Medical Center and top cardiac surgeon in Israel today, did not follow the mold of those students who were destined to become physicians. Growing up in Cordoba, Argentina in a Zionist family; he was a regular kid, somewhat on the wild side. As a teen, he spent most of his spare time involved in the Zionist youth movement where he met Naomi who would later become his wife and best friend.

A momentous turn took place when, after graduating from high school, he began to work with a truck driver. One day, the driver told Prof. Vidne how much he regretted that he had never studied and done anything with his life. It was then that Prof. Vidne decided to go to university, and later on to medical school. In his fifth year of studies, he chose to specialize in pediatric cardiac surgery because, as he explained: "in my heart, I believe this is the ultimate achievement in medicine." After graduating, he and his wife immigrated to Israel, and they settled in the Negev where he began his medical career as a general surgeon.

In 1991, he became the Director of the Department of Cardiothoracic Surgery at Rabin Medical Center and transformed the department into Israel's leading center of cardiac surgery. A world-class heart surgeon, Prof Vidne has given hope to severely ill heart patients who had little or no chance for survival. He admits that before each and every one of the complicated surgeries he performs, he fears losing the patient. As he stated, "every sense of my body is at its peak." And even though he knows he does the very best for each patient, he takes every loss of life as a personal failure. Prof. Vidne is a true leader, innovator and educator. A full professor of Surgery at the Sackler School of Medicine, Tel Aviv University, he was the youngest faculty member to receive this title.

Prof. Vidne's only regret is that his career left him so little time to spend with his family, missing, as a result, so many moments of his four children's lives. But in return, he gained great satisfaction from his career. In his spare time, no matter how exhausted he is at night, he always finds time to listen to the classical music that he loves and to spend Friday night din- ners in the company of his family, his wife, children and grandchildren who bring him such great joy. Perhaps, one of them will follow in the footsteps of the man who is responsible for bringing so many hearts back to life.

For the last 36 days I have been on active duty, serving in a reserve infantry battalion under an "extra active service" order, as part of "Operation Protective Edge" and Israel's war in Gaza against Hamas.