Saving a Life: The Story of Shai Golan 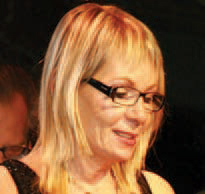 Dalia Golan at the Gala

The following narration accompanied the Gala video portraying the healing of a the wounded Israeli soldier, Shai Golan)

The date is August 4, 2006. The second Lebanon War is raging. A barrage of rockets lands in Northern Israel. Two soldiers, two brothers: Shai Golan, age 28, and his brother Eden, age 18, are returning home on a short leave from the army. An alarm goes off and katusha rockets fall, land and hit the two brothers. Almost instantaneously, the news reports on the accident.

Shai's mother Dalia was called to the scene: "As I approached the bomb shelter, I saw my son bleeding and unconscious. As a mother, I felt that the world had come to an end."

Shai Golan is then evacuated to a northern hospital. The doctors succeed to stabilize his condition. Yes his injures are critical and there is little hope.

His mom commented: "Right away I realize that the small hospital in the North could not handle the severity of my son's condition. The chief Army medical officer, Chez Levi, arrived. I asked him to refer me to the best hospital. My only concern was to save my son's life."

Dalia quickly arrives at the decision to transfer her son to Rabin Medical Center. Dr. Pierre Singer noted that Shai was in a very, very unstable position and could not be transferred immediately. As soon as he was stabilized after a few days, he was admitted to the Emergency Center and treated in the trauma room.

The admitting nurse saw him and was shocked: "He was incubated and unconscious, with infected lacerations all over the body. When I saw him, it hurt me like a mother."

Dr. Michael Stein, Head of Trauma Unit, faced a formidable challenge: His systems—respiratory, gastrointestinal, and urological were failing; he had severe infectious complications. But miracles happened and he pulled through.

Dr. Pierre Singer, who first treated him, was ecstatic: "It makes me very happy that Shai Golan is smiling again. I feel so happy with the rate of his recovery because it was a real success."

The video concluded with Dalia, Shai's mother, expressing her happiness: "This is my son Shai. He came home from the hospital on Rosh Hoshana and I wouldn't have received a better gift."

Next to her was her son Shai who thanked the staff of Rabin Medical Center, his family, and his wife. His reward was to hold his son Gai and survive to see him grow up.

His Memory Lives On

Rafael and Carmit Biel wanted nothing more than to have a child.

A Gala for Progress and Inclusion: The American Friends of Rabin Medical Center Supports Medicine — and Hope

When more than 500 real estate, finance and pharmaceutical executives gather for the 20th annual gala for the American Friends of Rabin Medical Center (AFRMC) at the Plaza Hotel on November 11, they’ll be doing more than raising funds to support critically needed programs at the most prominent medical center in the Middle East.