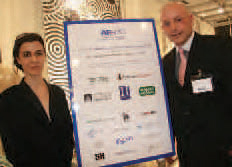 The third annual celebration of American Friends of Rabin Medical Center (AFRMC) New Circle for Young Professionals in Real Estate and Finance was held on February 26 at the stunning SICIS mosaic showroom in trendy Soho. AFRMC thanks Amy Tannenbaum, Vice President Sales and Marketing at SICIS, for coordinating this event, which has become the buzz of New York City as a premier real estate networking opportunity. Two hundred and twenty-five guests enjoyed the evening, which featured a keynote address by Stephen Siegel, Global Chair of CB Richard Ellis and a New York real estate legend. Stephen Siegel told the assembled crowd that "adversity breeds opportunity," even in the current difficult market. He advised the Young Professionals to have a life of service, to "start young, and give the rest of your lives back." Entertainment was provided by Iris Bahr, the star of the acclaimed Off Broadway Israeli show DAI.

In the aftermath of the Israel-Lebanon War in August 2006, a star-studded group of 550 supporters of American Friends of Rabin Medical Center (AFRMC) arrived at Cipriani on 42nd Street on November 5, 2006 to help Israel during difficult times.

Keeping the Past Alive With Joy

Although Rabin Medical Center has become a unique and modern facility, it has never been far from its Zionist roots.

For the first time in Israel, Rabin Medical Center's Department of Cardiothoracic Surgery, headed by Dr. Eyal Porat, implanted an artificial heart as a replacement for a real heart.