Emergency Preparedness for Terrorism and War 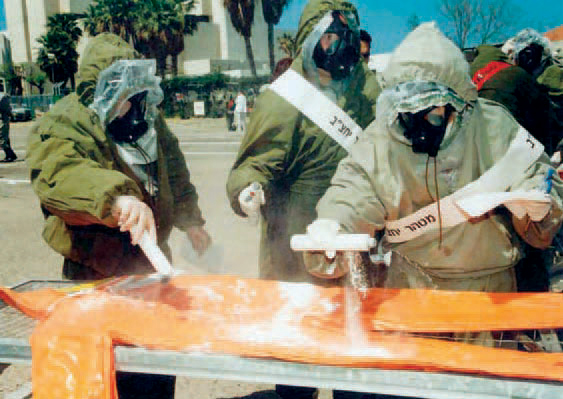 When you ask Israelis where they were in the summer of 2006, an immediate answer comes to mind. In the north of the country, those who didn't flee to safer parts of the country were in and out of bomb shelters due to constant rocket bombardment from Lebanon. The rest of the country worried about them, and about the safety of Israeli soldiers fighting for our security and well being. Procuring mattresses became a significant challenge. Those in the north looked to escape their war-torn environment. Thankfully,many families in the center of the country opened their homes to provide citizens from the north a much-needed rest.

It is hard to believe that a year has passed since the second Lebanon war. Scars are slowly healing from the terrible loss of life and the great damage to the north of the country. Israelis are now enjoying relative quiet. Yet with terrorist organizations such as Hamas and Hezbollah on Israel's back, a threat is always looming. Israel cannot take anything for granted. It must stay prepared to handle all emergency situations and potential disasters.

Rabin Medical Center, one of the largest foremost medical facilities in Israel, has one of six national Level One Trauma Centers and a heliport for the transfer of the wounded. The hospital is well known for its expertise in emergency preparedness and its ability to stand strong in times of crisis. The trauma team headed by the Director of the Trauma Unit Dr. Michael Stein and the trauma coordinator, Dina Albouar, have been working together side by side for 10 years. Their lifesaving stories could fill a library of books.

Sharing a consistent ongoing relationship with the Israel Defense Forces, Rabin Medical Center is prepared and ready for any emergency medical situation. Over the last months, the hospital has held three separate exercise drills for emergency preparedness, to test its skills on three different levels. One exercise drill involved toxic injuries in the event of chemical warfare. A second one handled the evacuation of patients from a hospital department that had been hit by a rocket. And yet a third one consisted of a general emergency exercise in the event of a large scale catastrophe resulting in casualties. From each exercise Rabin Medical Center gains greater insight into its strengths and weaknesses, and is able to learn to improve its readiness. The hospital prides itself on doing the utmost to be fully prepared to meet the demands of any and all emergencies.

Yet today, one major goal is yet to be achieved in emergency preparedness. We need a new Emergency and Trauma Center that will oversee and administer all preparations for emergency situations. The current emergency facilities are outdated and conform to standards of the 1960's, and represent one of the smallest ER's in the country, with only 850 square feet, yet handling 150,000 emergency visits annually—and this number is constantly growing. Furthermore, one of the most important lessons learned from the last war was the need for hospitals to have maximum protective structures in order to continue saving lives while under attack. So we need more space, more staffing, and a building capable of withstanding a major assault, both from biological and conventional attacks.

These conditions only increase the need for a new Emergency and Trauma Center at Rabin Medical Center, placing it as the premier priority of the hospital. Slated to be completed by 2011 and budgeted at a cost of 12 million dollars, the new facility will include state-of-the-art medical equipment to enable quick and accurate diagnosis, monitor patients' condition, and to provide immediate life-saving care. The underground parking area will also be built as a protective structure equipped with all the necessary facilities to act as an alternative hospitalization site for our patients. The hospital also plans to have protective play areas for children of hospital personnel who often need to be close by to parents at work for extended hours when the hospital is on high alert.

As the rains begin and winter comes to Israel, Rabin Medical Center is preparing for the possible onset of the swine flu virus in Israel, and the possibility that many people in the population may be affected and need to be hospitalized.

Everybody walks into an Emergency Department at some point in their life and the medical services they receive often make the difference between life and death.

While My Guitar Gently Weeps

A picture of three handsome, young soldiers smiling and embracing hangs framed in front of the bed in full view of Sergeant Itamar Solomon who just three weeks ago was admitted to Beilinson Hospital at the Rabin Medical Center.