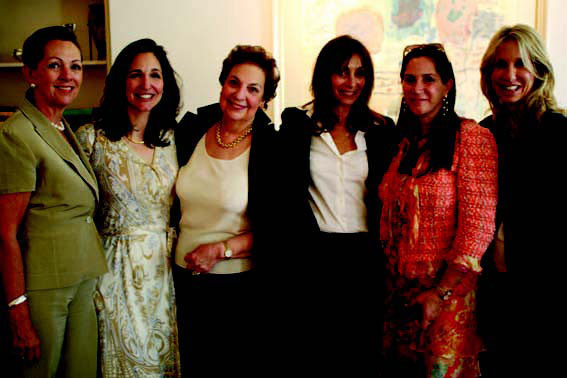 The first annual American Friends of Rabin Medical Center (AFRMC) Mother's Day Women's Luncheon was hosted by the Israeli ambassador to the United Nations and his wife, Ambassador Dan and Janice Gillerman, in their Manhattan home. Fifty women, both old and new friends of the Rabin Medical Center, attended the elegant buffet luncheon. Luncheon Chairperson and AFRMC board member Bilha Fish, M.D., introduced the luncheon's theme, the need for a new multidisciplinary Breast Cancer Center at the hospital. In Israel, as in other developed countries, one in nine women will develop breast cancer. Cancer is a systemic disease with many aspects, and there is a need to centralize the services women patients need in one state-ofthe- art facility. Ambassador Gillerman then addressed the guests, thanking them for gracing his home with so much goodwill and total commitment to Israel. He described the Rabin Medical Center as an incredible institution which reflected the high regard Israel has for saving lives. He noted that despite current clouds and soul-searching in Israel, Israel is a great democracy and a country which "makes the desert bloom, makes limbs move, and makes the world a better place, with its innovation and its creativity, coupled with such care and compassion." The audience was united in its enthusiasm about the importance of new Breast Cancer facilities.

The keynote speaker was the renowned actress Tovah Feldshuh whose role as Golda Meir set a record as the longestrunning one-woman play in Broadway history. She regaled everyone with a performance of the persona of her grandmother Ida, who had come from Kiev, just like Golda Meir. Tovah spoke movingly of the role of women, who carry and bear children, in the survival of the Jewish people, and how supporting the new Breast Cancer Center would be assuring Jewish survival and continuity. Healthcare in Israel is also a vehicle towards peace. The Rabin Medical Center serves the entire Middle East with its utting-edge medical technology and advances, treating both Jewish and Arab victims of terror.

The luncheon was a wonderful success, and plans were made to make this an annual event.

As a follow up to the Women's Luncheon, the American Friends of Rabin Medical Center will partner with Rabin Medical Center to help fund the establishment of the $2 million integrated breast care center, through launching a campaign in the near future to raise gifts of at least $10,000 from each donor.

Everybody walks into an Emergency Department at some point in their life and the medical services they receive often make the difference between life and death.

Last night was a great night for American Friends of Rabin Medical Center as AFRMC founder Arlene Strelitz and I represented all of us in Israel at the opening of the new 54,000 foot Jusidman Emergency and Trauma Center.