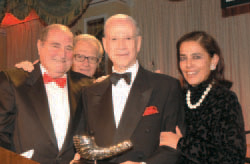 American Friends of Rabin Medical Center was pleased to honor Dr. Phillip and Mrs. Patricia Frost at its 2005 New York Gala Dinner. The Frosts set a new standard for charitable giving, by sharing the fruits of their tremendous success with a wide range of medical, educational, artistic, and cultural institutions. Having built IVAX into one of the largest generic and over-the-counter drug manufacturers in the world, Dr. Frost made healthcare a top priority in philanthropy as well as in business "We're here to support a great medical institution," he said from the podium at the gala dinner.

Rabin Medical Center is grateful for his attention, especially in light of the broad range of interests he shares with Mrs. Frost. As IVAX proceeds from strength to strength, the Frosts recently made the single largest donation to a music school - The School of Music at the University of Miami - in United States history. Dr. Frost, named the 2001 National Ernst & Young Entrepreneur of the Year, also serves as chairman of the board of trustees of the University of Miami, and as vice chairman of the American Stock Exchange.

Having recently merged IVAX with Teva Pharmaceutical Industries - Israel's foremost drug company - Dr. Frost achieved a tremendous career milestone. Rabin Medical Center is proud to have the Frosts' support, and was delighted to honor their roll call of professional and philanthropic achievement.

Tracing the Footsteps of a Founder

The Helen Schneider Hospital for Women at Rabin Medical Center: From Strength to Strength

The Helen Schneider Hospital for Women at Rabin Medical Center, headed by Prof. Marek Glezerman, is the largest comprehensive hospital for women in Israel, and deals with all aspects of women's health.