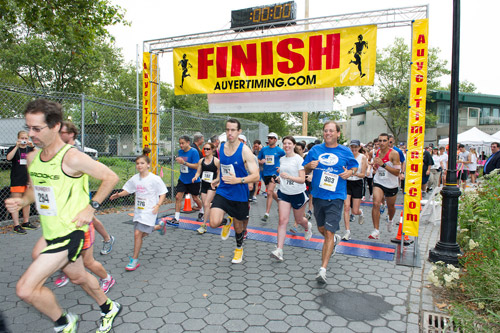 Dedicated volunteers arrived promptly at 7:00 am to assist the AFRMC staff in setting up and were greeted with coffee, bagels, and appreciation from the AFRMC team. After a busy morning, eager runners and walkers began arriving at 8:00, and continued to do so until the race began at 9:00 am. To the surprise of the AFRMC staff, an overwhelming number of unregistered participants, including park strollers eager to join our cause as a participant or a supporter.

As participants took their marks at the starting line, they were treated to remarks from both AFRMC's Executive Director Joshua Plaut and New York State Assemblyman David Weprin, who boldly declared, "What we lack in sun, we make up for in enthusiasm!" Weprin went on to give praise the Schlep, as it was his second year attending;

1 in every 8 Jewish women will be diagnosed with breast cancer. They could be our mothers, daughters, or sisters. This event is integral in terms of educating the public, spreading awareness, and making sure that people get proper screenings.

Joshua Plaut concluded, "Thank you to all runners for generously supporting the international fight to cure breast and ovarian cancer." He then started the race by proclaiming to runners and walkers, "On your marks, get set, Schlep!"

Overall the event was a fundraising success. Participants and benefactors alike helped to raise over $45,000 in just one month, for the Early Breast Cancer Detection Clinic at Rabin Medical Center, which is the only clinic in Israel specializing in the detection of the BRCA gene mutation in order to provide the earliest possible detection of breast and ovarian cancer cells. The cause attracted runners of all ages from all over the world. Runners and walkers came from all five New York boroughs, New Jersey, and Connecticut and from as far away as Washington DC, Seattle, Maryland, California and Australia. Additionally, donations came in from Baltimore, Hawaii, Chicago, Philadelphia, Los Angeles, and Denver. Ages of participants ranged from 8 year old Tani Leitner to 89 year old Grace Salant, who were both participating in the event for the second year in a row. Another second year participant was 36 year old cancer survivor Noga Maliniak, who had a personal connection to the cause. She has been treated at the Davidoff Center at Rabin Medical Center six years ago. She praised the treatment she got at the Davidoff Center, and credited it with saving her life, as well as keeping her healthy.

The event culminated with an awards ceremony. The awards for best overall female and male runners went to Stephanie Amarnick from JCP and Michael Tenebruso, who completed the race with times of 24: 28 and 20: 03 respectively. The award for best overall fundraiser went to AFRMC's own intern Catherine Jessen, who successfully raised $1,206, and the award for best team fundraiser went to Ben Casper, who raised $1,448. Special thanks to the all of the teams for their dedication and support, including, City Streakers, Emanu-El NYC, Naomi's Schleppers, JCP, Svetlana's Gals, Frenchway Travel, Cool Runnings, Go Blue, Positively Plaut, Fast Foxes, Dashing Divas, Florin, Hendler, Moishe House Murray Hill, Moise House Williamsburg, SunFall Amour, Team Linda, TexaYorkers, The Adelman's, The Music Plays On, Battery Park Synagogue, and West Coast Walkers.

The American Friends of Rabin Medical Center staff would like to thank everyone who participated, volunteered, and donated to the Second Annual NYC Schlep, for helping to make it an overwhelming success. We look forward to seeing you all again at the 2013 Schlep!

For the first time ever in Israel, the dedicated staff at the Rabin Medical Center performed a small intestine transplant in an adult.