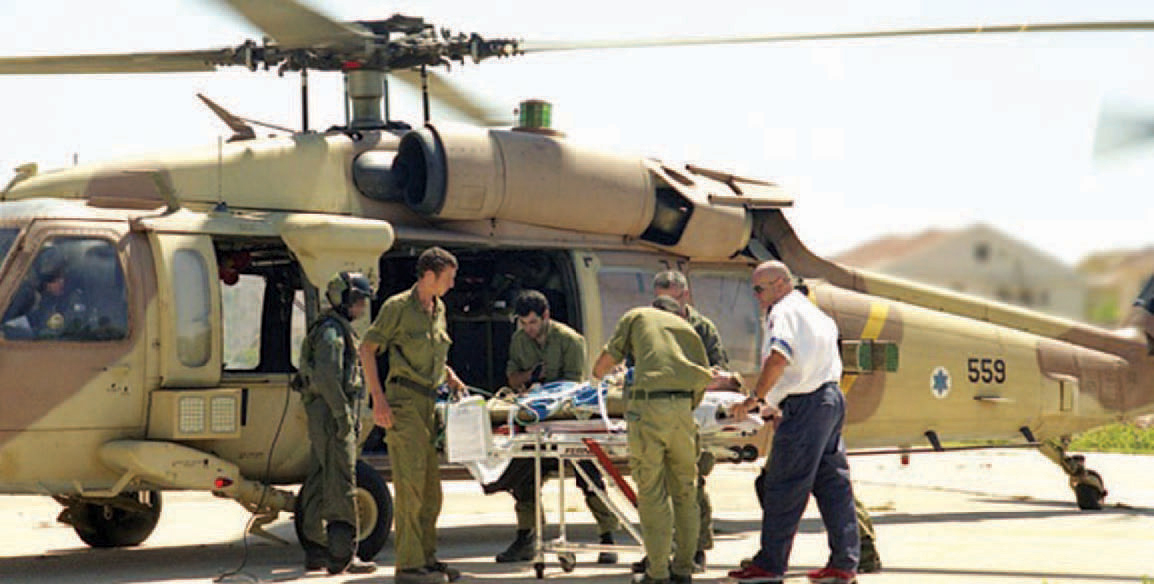 The story of Rabin Medical Center is the grand story of Israel, of the sacrifices made by men and women daring to create a Jewish State where Jews could finally feel safe from 2000 years of anti-Semitism, Holocaust, and oppression. At every step of the way, the brave men and women of Israel gave their lives to defend the Promised Land. At every major historical juncture, Rabin Medical Center's staff has been there to heal and comfort Jews who flocked from all over the world to contribute to the survival of a fledgling state.

When the State of Israel was founded in 1948, Beilinson and HaSharon Hospitals (which eventually merged in 1996 to form Rabin Medical Center) were already operating under the British Mandate. So when Israelis, many of whom were Holocaust survivors, found themselves under attack by Arab countries, Rabin Medical Center was ready to receive the wounded and the sick.

Israel and the then three-story Beilinson Hospital received its first test during the War of Independence when surrounding Arab countries refused to accept Israel's independence.

Moshe Levy was only 18, a member of the Etzel Group, when he was injured: "I was a unit commander, and I was shot while trying to help one of the wounded. The bullet went though my lungs and then through my spine. I couldn't move my arms or legs and was taken to Beilinson Hospital where Prof. Ashkenazi, a well-known neurosurgeon who had flown in from Romania, operated on me. There was no proper anesthesia and the surgery lasted five hours. Later my mother, who was Romanian, spoke with the doctor and understood that a great surgeon had saved my life." Prof Ashkenazi later immigrated to Israel and joined Rabin Medical Center as the Head of the Neurosurgery Department.

In 1956, Beilinson Hospital had barely completed its new sevenstory building, when preparations began for the Sinai Campaign, a response to threats by Egypt to close the Suez Canal and the Tiran Straits. The lobby of the new building was turned into an ER.

Nachum Gamadi is 70 years old today: "I was only 19 years old when the Sinai Campaign began.Our task was to push the Egyptians back from the military post of Rafah. I was shot by an Egyptian soldier while lying in the trenches. The bullet went into my hip and through my stomach; I couldn't feel my legs. When we realized that the bullet was still inside me and that I was suffering from severe internal injuries and blood poisoning, I was transferred to Beilinson Hospital where I underwent 30-40 surgeries. I was treated by wonderful doctors and will never forget the nurses who nursed me back to health. I owe them all my life."

In 1967, with the winds of war blowing, emergency preparations began, and wards were sealed off. The Six Day War was the first war that would include massive air attacks and bombings, and the possibility of chemical warfare. The late Yitzhak Rabin was then the Israeli Army Chief of Staff and his wife Leah, who many years later after his assassination would give his name to the hospital, came every night to visit the wounded and lift their spirits.

On Yom Kippur, in October 1973, as Israelis prayed in synagogues throughout the country on the holiest day of the Jewish year, Egypt and Syria attacked Israel and the bloodiest war Israel had ever experienced began. As a shocked nation stood by, Beilinson Hospital, with no time to prepare, began to treat the endless barrage of wounded who kept on coming. Ninety percent of the hospital's physicians were called to the front lines, and those who stayed in the hospital worked around the clock, under enormous pressure.

Sonya Tunic, a Holocaust survivor, immigrated to Israel and studied nursing at the Dina School of Nursing. She lived on the hospital grounds with her family for 8 years. "During the Yom Kippur War I was assigned to the Plastic and Reconstructive Surgery Department, which was overcrowded with wounded soldiers at all times, some with very severe burns. I remember one case of a soldier whose face was so badly burned that he fainted the first time he saw himself; but with proper treatment and psychological help he survived."

Almost ten years later, tension with Lebanon, which led to the first Lebanon War in 1982, resulted in constant bombardment and infiltration. A group of orthopedic surgeons from the hospital set up an orthopedic clinic in the town of Kiryat Shmona on the Northern border, and traveled there on weekends to treat the wounded.

The events of the 1990s, including Iraq's threats to attack Israel with chemical and biological weapons, raised the need for advanced trauma response. In 1998 a national Level One Trauma Center was established at Rabin Medical Center, one of only six in the entire country. The Trauma Unit is capable of treating large numbers of multi-injured patients-both adults and children.

A new type of warfare-terrorism and suicide bombings-gripped Israel at the turn of the 21st century. Fear overtook the country and Rabin Medical Center played an important role in healing the wounded and in comforting the grieving as a result of the Intifada.

Hani Abramov, a 19 year old young woman soldier,was riding in a jeep with two male army colleagues patrolling "the Green Line," the dangerous border that separates Israel from the Palestinian West Bank. Thinking they were enjoying a peaceful interlude, the group had left their helmets and Kevlar flak jackets behind. Then, suddenly, a car with four men inside sped up and overtook the jeep.A bullet hit Hani's right leg. Then a second bullet slammed into her face and knocked her out of the jeep. Doctors later told her she was actually lucky as the bullet missed her brain by a centimeter. After 25 days in the hospital, Hani went home but has since returned an endless number of times for reconstructive surgery, and still has to undergo additional surgery. Hani, always optimistic, has since completed her army service and is now trying to lead a normal life.

The Second Lebanon War began in the summer of 2006 when three Israeli soldiers were kidnapped behind enemy lines and Katyusha rockets were fired continuously on innocent citizens in the North of Israel. Rabin Medical Center, only 40 minutes from Haifa, a city that endured heavy rocket fire, went on high alert. The hospital provided medical care to many soldiers and to numerous residents of the North who came to seek shelter in the center of Israel.

Rabin Medical Center's mandate goes beyond treating Israel's citizens. Their mission of "humanity without borders" extends to regional and international humanitarian needs. Rabin Medical Center was among the first facilities to provide help for radiation victims of the 1986 Chernobyl accident. Dozens of children were flown in from Russia for weeks and months of treatment at the Department of Pediatric Hematology and Oncology.

Throughout the country's history, through peaceful times and during the many wars, Rabin Medical Center has been and continues to be a leader in transplantation, cardiology, cardiothoracic surgery, neurology, neurosurgery, urology, gastroenterology, and liver diseases. Its Cancer Center, advanced Genetic Institute, Women's Hospital, and National Level One Trauma Center are world renowned.

Fewer than 20 such operations have been performed anywhere!
by JUDY SIEGEL-ITZKOVICH, Jerusalem Post

A special interfaith mission to Israel, of Jews and Christians from New Jersey and across the USA, was launched in November 2006 under the leadership of Mr. William Sutter, head of Friends of Israel and Alan Respler, head of the Jewish Community Relations Council of Southern New Jersey.