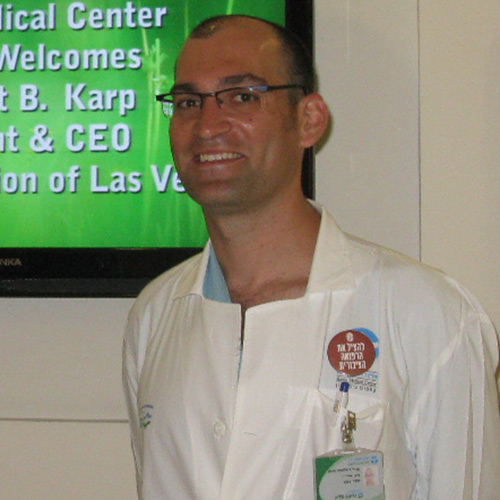 Dr Eli Sidon was born at Beilinson Hospital, Rabin Medical Center in Petah Tikva in 1979, the very same hospital where he is now an orthopedic resident. Born to two Israeli parents "Sabra's", he is a second generation Israeli. One of four children he has an older brother and 2 younger sisters

In 2001 he was accepted to the prestigious Sackler School of Medicine at Tel Aviv University where he received his medical degree in 2009. He decided to specialize in Orthopedics and is now doing his orthopedic residency in the Department of Orthopedic Surgery and Traumatology at Rabin Medical Center's Beilinson Hospital.

He married Reut, a dentist, in 2005 and they have two children, a little girl, Yaara who is 5, and a 2 year boy, Lavie. They live in Raanana which is about 1/2 hour from Tel Aviv and are Shomer Shabbat. An avid bicycle rider he sometimes rides his bicycle from Raanana to the hospital, which is about 20-25 minutes by car.

Now in his second year of his orthopedic residency, he has shown to be a skilled, talented and compassionate surgeon and is well liked by the staff, his peers and his patients. He has become a valued member of the staff, assisting in all types of orthopedic surgeries, including trauma patients and participates in all staff activities. In the areas of research he conducts clinical trials and is currently working on "Effect of Vitamin C on CRPS".

He was chosen by the Head of the Orthopedics Department, Dr. Yaron Bar Ziv for this first fellowship in Las Vegas as he is considered one of their most promising orthopedic residents. He is very excited to have this opportunity and is looking forward to both the conference and the fellowship as well as meeting some members of the Jewish community.